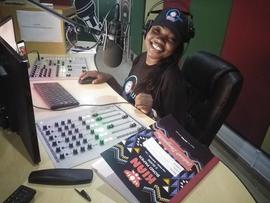 Navigating your adolescent years can often be confusing and intimidating to say the least, let alone protecting yourself from the unintended consequences of unprotected sex. How does a young woman safely negotiate condom use with her partner? Where does a teenage girl go to receive contraceptives without being judged by a healthcare worker? What is the role of young men and boys in preventing unintended pregnancies? These are some of the issues that 32 percent of East and Southern Africa’s youthful population aged 10-24 years-old often contend with on their journey into adulthood.

As a tool to aid these youth, UNESCO, UNFPA, SAfAIDS and Save the Children are launching the Regional “Let’s Talk” radio drama series on Early and Unintended Pregnancy (EUP) on Thursday, 21 April 2022 at 10:00 am (SAST). H.E Senator Themba Nhlanganiso Masuku, the Honourable Deputy Prime Minister of Eswatini is making opening remarks for the launch of the “Let’s Talk” radio drama series.

This is a continuation of their ongoing partnership through the “Let’s Talk EUP” campaign. The campaign was launched in 2019 to advocate for action to eliminate EUP at both regional and national levels through to the grassroots levels in 21 countries in East and Southern Africa (ESA). The “Let’s Talk” campaign focuses on health, education and rights. Subsequently, the radio drama series addresses issues related to sexual and reproductive health and rights (SRHR) information, modern contraceptive use, early onset of sexual activity, violence against women and improving young people’s access to SRH services.

The “Let’s Talk'' radio drama series follows two aspirational and dynamic sixteen year-old girls, Lulu and Tendo, as they navigate the ups and downs of school, young love and life in the fictional community of Riverblock alongside their parents, teachers and religious leaders. They grapple with an unintended pregnancy while balancing their education and planning their future. The 13-part radio drama series is available in English, French, Portuguese and Swahili.

The series amplifies the “Let’s Talk EUP” campaign messages by showcasing the importance of providing timely comprehensive sexuality education (CSE) for in and out of school adolescents and youth. The “Let’s Talk” radio drama series helps to motivate policies, which stem from social behaviour change, that can contribute to reducing early and unintended pregnancies among adolescents and young people in the region.

Sensitization of EUP is paramount in the region as ESA has one of the highest adolescent fertility rates in the world, at 102 per 1,000 live births. Many of these early pregnancies are not planned, as evidenced by the high rate of unintended pregnancy in Africa at 89 per 1,000 overall. Furthermore, East Africa accounts for 112 per 1,000 live births, resulting in an estimated 21.6 million unintended pregnancies per year. Adolescents are more likely to have physical complications during their pregnancies, especially from unsafe abortion and more likely to become young mothers a second time.  They also face rejection from their peers, are more likely to drop out of school and face isolation from their communities.

After AIDS, the second-highest cause of death for adolescent girls are pregnancy-related complications in the ESA region. Their babies also face a substantially higher risk of dying than those born to women aged 20 to 24 years-old, and are at greater risk of malnutrition, poor mental and physical development, and low educational attainment.

This radio drama series is inclusive and brings together different audiences for conversations. While primarily targeting adolescent girls and young women, the drama speaks equally to and engages men and boys as agents of change. It also aims at starting conversations in order to create a dialogue as well as attitude and behaviour change for youths.

The “Let’s Talk EUP” campaign and the “Let’s Talk” radio drama series are contributing to the vision of an ESA region where all adolescents are empowered and have the knowledge, information, agency and support to prevent early and unintended pregnancy and reach their full potential.

All the episodes of the Radio Drama Let’s Talk EUP!